MENUMENU
INR
Need help? + 91-9328312112
Sign in
Wishlist (0)
0
Home>Homoeopathy>ADEL-39(apo-SCIATICA) FOR TREATMENT OF SCIATICA SYMPTOMS SUCH AS PAIN IN LEGS, LOW BACK PAIN AND HELPS IN SOFT TISSUE INFLAMMATION.

ADEL-39(apo-SCIATICA) FOR TREATMENT OF SCIATICA SYMPTOMS SUCH AS PAIN IN LEGS, LOW BACK PAIN AND HELPS IN SOFT TISSUE INFLAMMATION. 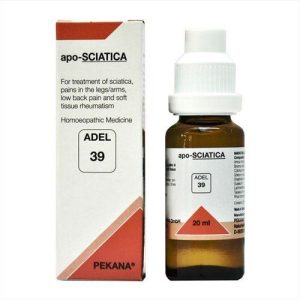 FOR TREATMENT OF SCIATICA SYMPTOMS SUCH AS PAIN IN LEGS, LOW BACK PAIN AND HELPS IN SOFT TISSUE INFLAMMATION.

INDICATIONS: For pain that radiates along the sciatic nerve from the lower back down to the legs, acute and chronic backache. Also helps in soft tissue inflammation

The unhindered circulation in congested regions of the body is restored by Arnica montana balancing the blood pressure and inflamed regions and stagnations in it. It also treats rheumatis in different parts of the body and conditions resulting from injuries, overuse and strains.

Colchicum autumnale is recognized as an important remedy for dyspeptic irregulations, but it is more used as one of the best active substances for gout and arthritic attacks in the small limbs, tenosynovitis and lumbosacral pains.

A classical function against sciatica and low back pains is Gnaphalium obtusifolium. Tearing and drawing pains in the arms, legs and calves can be felt.

Guajacum in reference to displaced infections shows gouty – inflamed rheumatic processes in all muscles and limbs with burning symptoms in the affected regions, combined with lameness, sticking pains and tendon shortenings..

Lachnanthes tinctoria in its remedy picture shows neuralgic-rheumatic states with pains, stiffness and cramps in the neck, but it will be found in other regions of the body too, for example in the splint bones and feet.

Neuralgia and muscle rheumatism can be found in the picture of Solanum dulcamara. Ice cold, paralysed, stiff, sore, bruised and pains are the learned symptoms for the well proven remedy.

Taraxacum officinale shows indications for sticking rheumatic pains, but it mainly regulates the metabolism of the liver and the eliminating power of the kidneys. It works against different neuralgia including knees and pain in the limbs.

Rhus toxicodendron is indicated for treatment of sciatica, rheumatic symptoms, including joint and muscle pain, lumbago, brachial neuritis and tendosynovitis.

RECOMMENDED DOSAGE: (Unless otherwise prescribed)
Adults 20 drops,Children 7 – 10 drops, 3 times a day in some liquid before meals